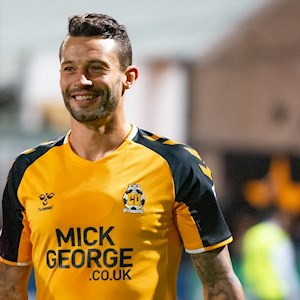 A vastly experienced striker, Marc started his career with Blackburn, making two appearances in between loan spells with Crewe, Oldham, Halifax and Swansea.

He moved to Northampton in 2003, playing under current U’s Head Coach Colin Calderwood, then had further productive spells with Rochdale, Barnsley – where he collected a League One Play-off Final Winners medal - Chesterfield and Port Vale. A natural goal scorer, he netted 75 times in 202 whilst at Vale Park, leading to a return to Northampton, where he secured a promotion from League Two. Marc pocketed another 50 goals in 144 appearances during his second spell with the Cobblers, prior to heading west and a two-year stint with Swindon. Another solid return of 16 goals during his 51 games took his tally to 203 in 667 career appearances, whilst adding three promotions to his CV. The 37-year old penned a short-term deal with the U’s in August 2019 and will remain at the Abbey Stadium until January. Always a threat to opposing defences, he bulged the net three times in his opening five games for the club.