Following his goal that secured a memorable 1-0 victory over Premier League Newcastle in the FA Cup Third Round last weekend, striker Joe Ironside once again provided the goods after nodding in Wes Hoolahan’s free kick in the first minute of stoppage time against Lincoln City on Saturday.

Prior to Saturday’s win, Harvey Knibbs’ second half brace set up a final eight Papa John’s Trophy tie against Rotherham United on the 25th January (7pm), after knocking out Portsmouth.

Despite only winning one of their last 11 games in all competitions, there has been a notable upturn in performances for Doncaster Rovers since Gary McSheffrey was given the nod for the manager’s job towards the end of December. Most recently, Omar Bogle’s second-half goal was unable to spark a comeback against Wigan – having found themselves two-goals down to the promotion chasing Latics after 54 minutes.

Prior to Saturday’s defeat against Wigan, Ellis Harrison’s debut goal for Fleetwood Town condemned Donny to their third successive defeat, after the forward poked in Paddy Lane’s low cross five minutes after the restart.

The Manchester United loanee scored his one and only goal this season against the U’s when both sides met at the Keepmoat Stadium in October. The midfielder, who has been deployed in a more defensive role following the absence of John Bostock, assisted Omar Bogle’s goal against Wigan on Saturday via a free kick.

Memories of the two sides 1-1 draw at the Keepmoat Stadium will be fresh in fans’ minds having only met in the league at the end of October. Following some excellent work by Shilow Tracey down the U’s left, the winger’s cross was turned into his own net by defender Dan Gardener just seven minutes into the game. However, after 68 minutes, Doncaster Rovers’ endeavours were rewarded as Ethan Galbraith excellently fired in from 25-yards.

Tuesday’s visitors Doncaster boast the historical advantage when it comes to head-to-head fixtures between the two sides over the past 50 years, with Donny winning on 10 of the 30 occasions, and the U’s only prevailing on eight occasions, and not since November 2005 – with Cambridge United running out 3-2 winners in the LDV Vans Trophy at the Abbey Stadium.

Prior to October’s meeting, Doncaster sealed a come-back win in February 2017, with Donny, en route to eventual League Two promotion, winning 3-2 in front of 4,236 at the Abbey Stadium. Tommy Rowe, Mathieu Baudry and John Marquis all striking to seal Rovers’ first league win in six.

U’s head Coach Mark Bonner appreciates the quality Doncaster Rovers possess, despite their current league position, “They have got some good players in their team, especially in central midfield. Ethan Galbraith and Matt Smith are both very good options, they have signed Kieran Agard, and they have got Omar Bogle back in and around the team. [Joe] Dodoo’s been causing big problems and they have probably had a little bit more direct playing them in recent games.”

Gary McSheffrey was pleased with the fight his side showed after going 2-0 down to Wigan on Saturday, “It was a big improvement in terms of our work rate and the levels we reached to compete.

“The game is won and lost in both boxes, and we switched off on two occasions which resulted in goals.

“I felt we gained in confidence before half-time and matched them, but we missed that bit of composure when we got into good areas.”

Christopher Sarginson has been appointed as referee for Tuesday’s Sky Bet League One match between Rovers and Cambridge United at the Abbey Stadium.

He will be assisted by Nicholas Dunn and Adrian Tranter. The fourth official will be Declan Ford.

If you can't make it to the game, stream the clash live on iFollow. Match Passes cost just £10 and are available to buy now. The simplest way to do so is by clicking here and selecting the Doncaster fixture.

Cambridge United recorded a fourth consecutive win with a clinical 3-1 victory against Doncaster Rovers at the Abbey Stadium...

A composed finish from Harvey Knibbs on the stroke of half-time was then extended by Harrison Dunk’s header on the hour mark to put United into a healthy ascendency. Joe Dodoo conjured up an instant consolation to ensure a nervy finish, but the U’s, as they’d been doing so impeccably recently, saw the game out professionally by killing the game off through Sam Smith to steer themselves up to 13th in Sky Bet League One.

Mark Bonner named two changes from the side that clawed victory over Lincoln City at the death three days earlier. Jack Lankester and Knibbs were drafted into the attacking ranks with Ben Worman and Sam Smith making way.

Ahead of the evening’s clash, the U’s were in inspired form – unbeaten in four and proving a tough nut to crack defensively. Boasting a healthy six-point cushion from the bottom four, the aim was to showcase why they’re in a false position. Doncaster’s situation was quite the contrary - they were allocated rock bottom and ten points adrift after a run of nine losses in ten. Uninspiring on their travels, the South Yorkshire outfit had picked up the solitary point from their opening twelve away fixtures.

The visitors started the encounter as the more assertive of the two. After Paul Digby was dispossessed in the middle of the park on the 11th minute, a teasing delivery was made towards Kieran Agard who looped a header over the crossbar. Moments later, some valiant U’s defending denied the opener when the rearguard blocked Josh Martin and then Tommy Rowe’s follow up.

However, United started to forge out some menacing chances of their own. On the 20th minute, Brophy, who had proven threatening down the left, cut inside and played a neat ball into an onrushing Lankester who fired low into the palms of Louis Jones.

Ultimately, it was Rovers who were carving out the clear-cut attempts. Just shy of the half an hour mark, Martin clattered the crossbar from 20 yards with a venomous free-kick. Another attack was imminent – which concluded in former-U Kyle Knoyle taking a light touch inside the box and volleying wide.

On the counter attack, Matthew Smith teed up Agard down the right on 37 with the new signing arrowing towards the far bottom corner which Dimitar Mitov got down low to paw away.

Against the run of play, the U’s drew first blood on the stroke of half-time. Brophy’s splitting pass was on a plate for Lankester, who found an unmarked Knibbs down the right – the winger showcased excellent composure to slot past Jones for his 6th goal of the campaign and break deadlock at a decisive time.

From the early stages following the interval, United were playing with real confidence in an exuberant spell of sheer domination - particularly in the final third - without any real goalmouth action.

That came into fruition on the 62nd minute when the advantage was doubled to allow the U’s some breathing space. A sublime curling cross from Adam May evaded Donny’s defence and fell towards Dunk who headed home his first of the campaign before wheeling away in front of the Newmarket Road End.

The healthy lead turned slender eight minutes later when M. Smith turned into dangerous territory and teed up Dodoo who nestled home from six yards to restore hope for Gary McSheffrey’s side.

Purring, the visitors were now enjoying a neat spell, indistinguishable to their pressure from the first half. Brandon Horton blasted wide a speculative attempt on 75 as they charged forwards in their numbers.

Despite the danger, United sealed the points deep into stoppage time when Brophy terrorised his opposite number and squared the ball to substitute Smith who stabbed home to ensure it was game, set and match.

Home comforts continue on Saturday (22nd January) as the U’s take on relegation-threatened Crewe Alexandra here at the Abbey Stadium. Be sure to back the boys as they seek three more valuable points. 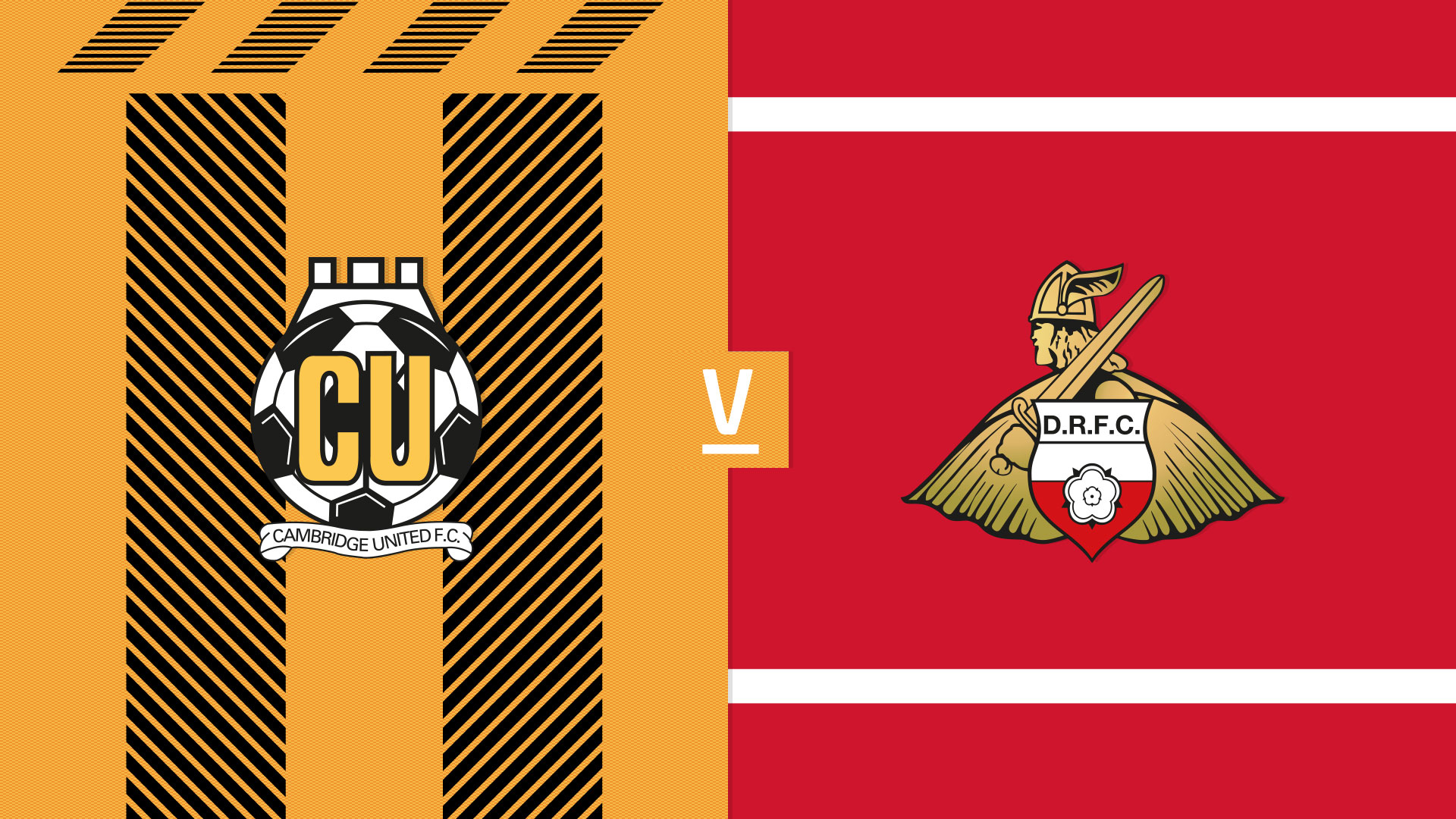 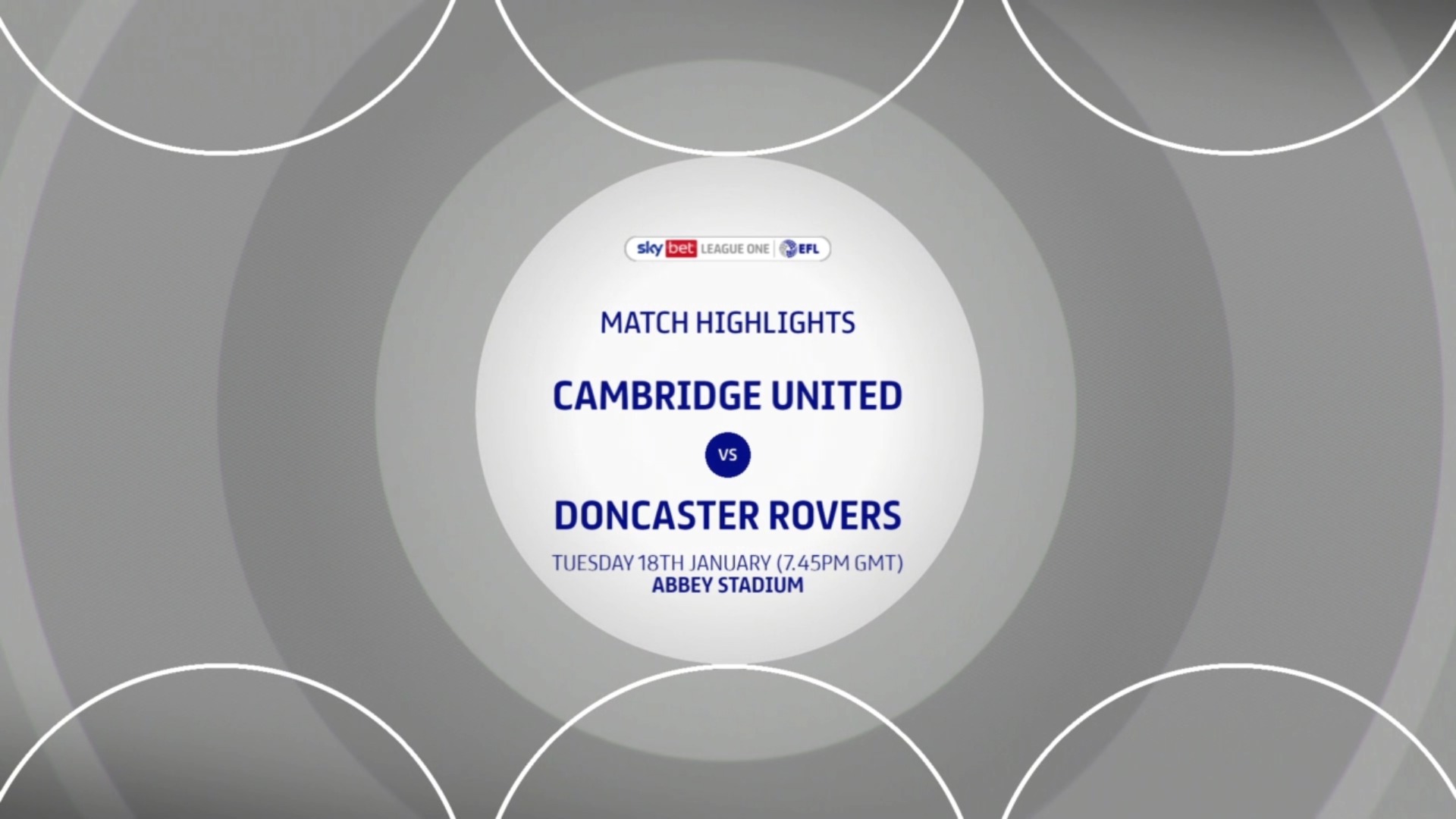 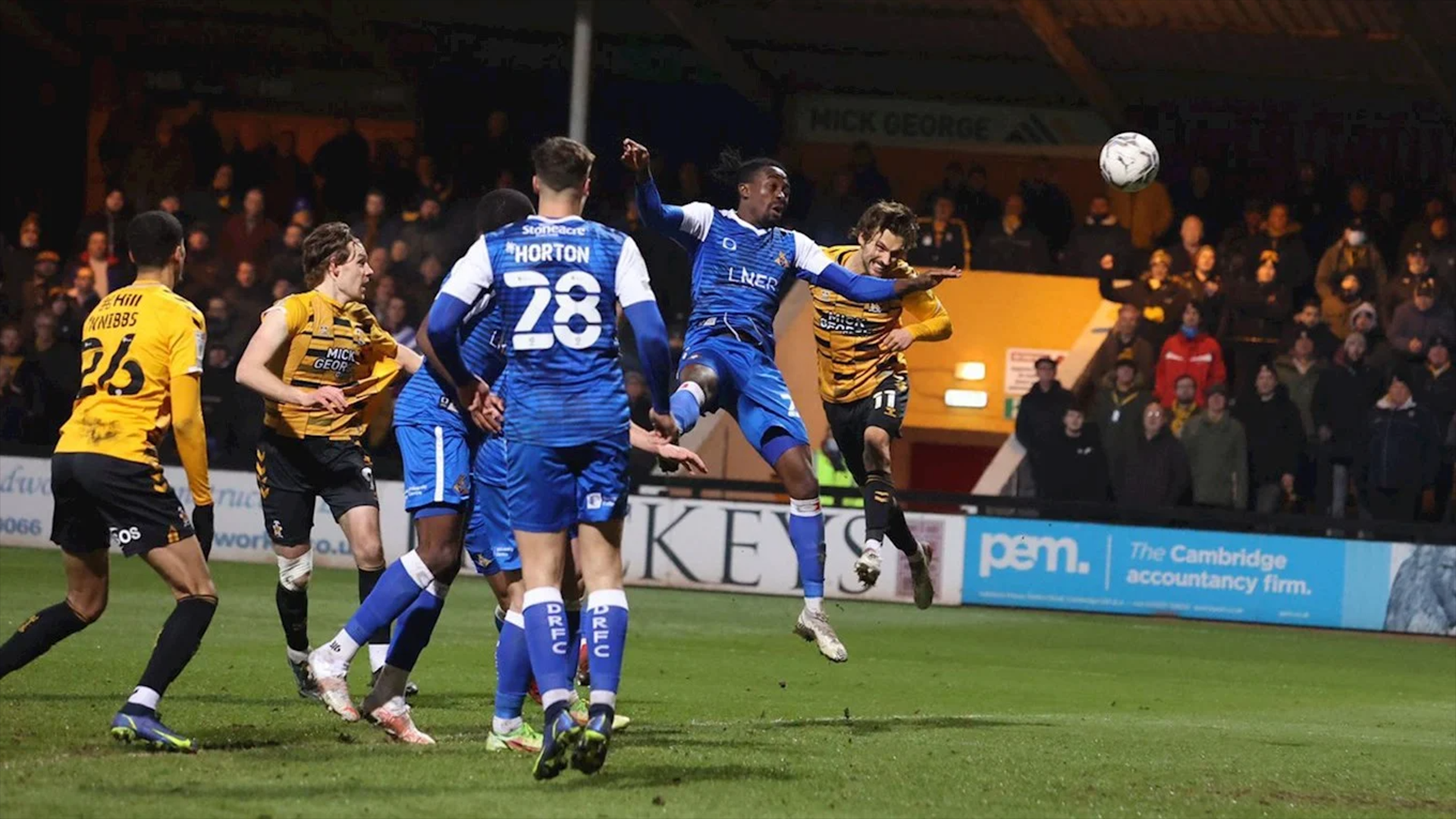